Warm temperatures are one of the region’s defining characteristics. Regional temperatures run higher compared to northern climes because the subtropics receive more direct sunlight, and there is little water available to temper its power. In the Southwest, the cool season begins roughly in October and lasts through March, while the warm season smothers the other half of the year. According to the Western Regional Climate Center, in Arizona "high temperatures are common throughout the summer at the lower elevations and temperatures over 125 degrees F have been observed in the desert area. The daily range between maximum and minimum temperatures sometimes runs as much as 50 to 60 degrees F during the drier periods of the year. During winter months, daytime temperatures may average 70 degrees F, with night temperatures often falling to freezing of slightly below in the lower desert valleys." 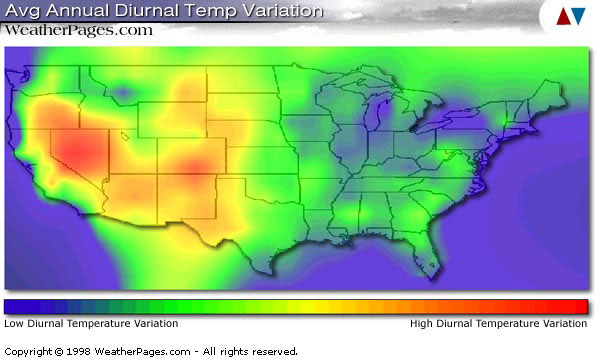 Temperatures are not independent of precipitation and a related factor, humidity. When humidity levels are low, most commonly during winter and spring, temperature has greater daily swings (Figure 1). When humidity levels are relatively high, such as during the summer monsoon, temperatures often fluctuate less dramatically from day to night. When there’s not much water available for evaporation, more of the sun’s energy can go toward boosting temperatures. That’s partly why Phoenix temperatures can regularly climb above 110 degrees F while the mercury rarely surpasses 100 degrees in more humid climates even closer to the equator. Because water vapor is a greenhouse gas, though, its presence in the atmosphere tends to hold in heat that might otherwise escape. In desert climates, this influence is most noticeable on summer nights, when cloudy skies can keep nighttime temperatures higher than they are on clear nights. 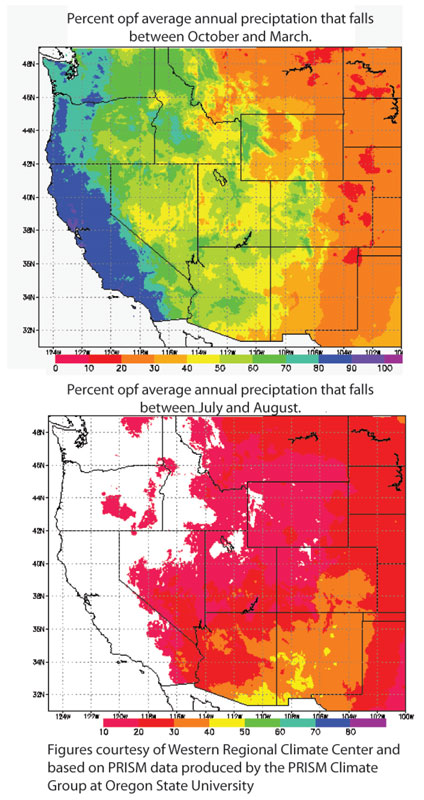 Precipitation in the Southwest has two distinct seasons. Raucous summer thunderstorms characteristic of the monsoon season are spotty, while drizzly winter storms last longer and engulf large portions of the region. Winter precipitation often involves large-scale frontal systems. It can fall as snow in some of the higher elevations, such as along the Colorado Plateau’s Mogollon Rim in northern Arizona. Rain and snow that falls between October and March accounts for nearly half of the region’s annual precipitation (Figure 2).

Where northern cold fronts and southern warm fronts meet, the jet stream flows as a current of swift-moving air high in the atmosphere. That’s why climatologists focus on the jet stream when considering precipitation patterns. Similarly, El Niño and La Niña events exert an influence on southwestern precipitation largely by affecting the jet stream.

Winter precipitation also plays an important role in forest health. The growth rings of high-elevation southwestern trees typically reflect cool-season precipitation, with more growth occurring in years of abundant snow and rain. Because of this, researchers can use tree rings to reconstruct winter precipitation patterns far beyond the instrumental record which goes back only about 100 years in the West.

Winter and spring precipitation also exerts a large influence on when the wildfire season starts and whether grasslands or forests are more susceptible to flame. A lack of cool-season precipitation can make forests more vulnerable to wildfires. Meanwhile, wet winters actually can spur fires in grasslands made lush by cool rains and then cured into kindling during a subsequent dry heat.

The monsoon season arrives in the summer, often around mid- to late June. Roughly half of the annual rainfall comes during the summer monsoon in southern Arizona and New Mexico (Figure 2). Monsoon rainfall events tend to be short and spotty, with intense, local storms drenching some areas and neighborhoods but not others. The water the storms bring quickly flows off the landscape into streets and rivers, with most remnant moisture soon evaporating in the summer sun.