December Precipitation & Temperature: December precipitation ranged from average to much-below average across most of Arizona and New Mexico, with record-dry conditions along the western edge of Arizona and in pockets of central and eastern New Mexico (Fig. 1a). December temperatures were above average to record warmest in both states (Fig. 1b), continuing the pattern observed during fall 2017. 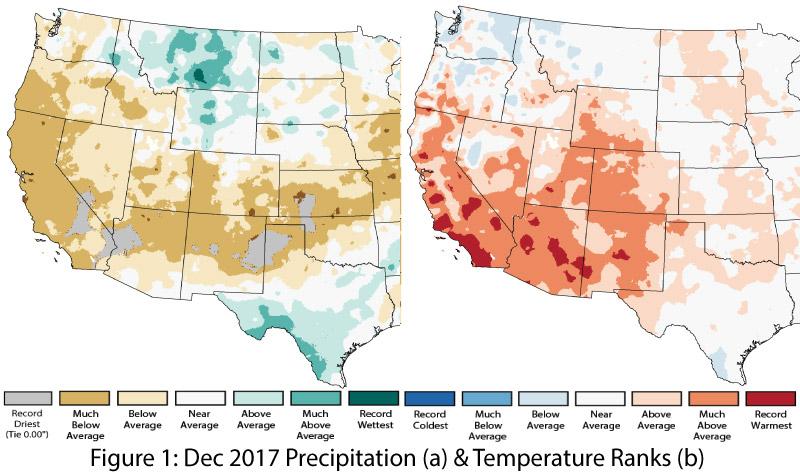 Water Year (to-date) and 2017 Precipitation and Temperature: Looking to the water year (Oct 1-present), much of Arizona and New Mexico have been recording below-normal precipitation (Fig. 2) and above-average temperatures (Fig. 3) for the period (for more details see the water year to date summary). Annual precipitation in 2017 ranged from much-below average to average in Arizona, and from below average to much-above average in New Mexico (Fig. 4a), while average annual temperatures were record warm across most of Arizona and New Mexico (Fig. 4b). 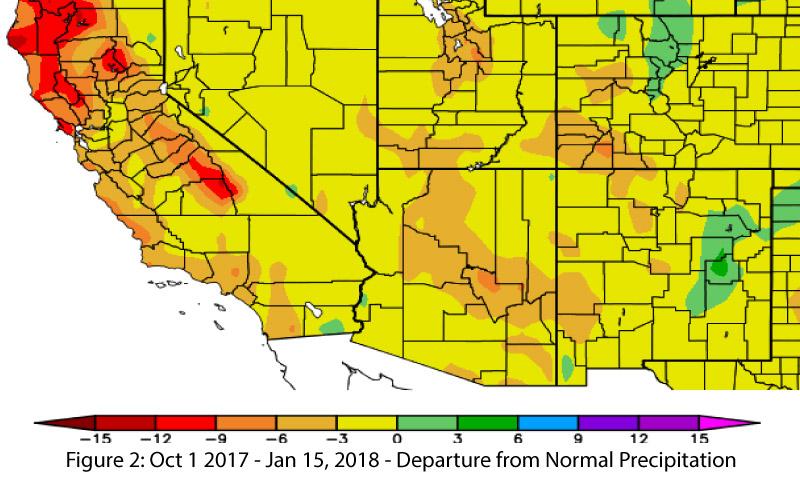 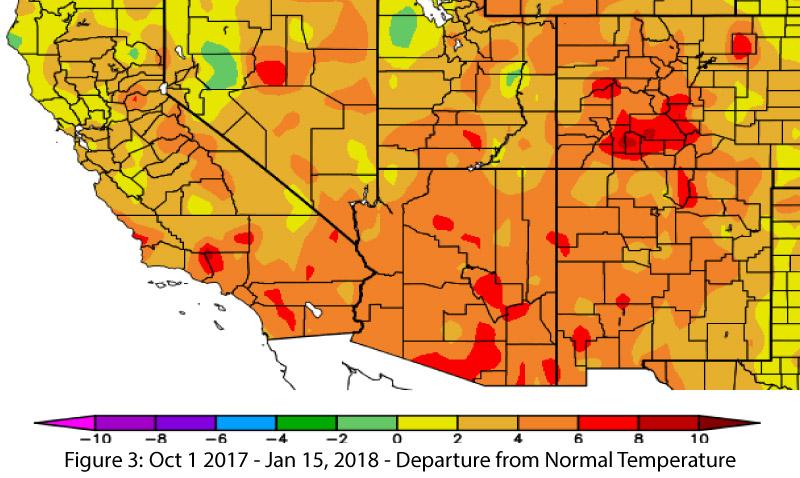 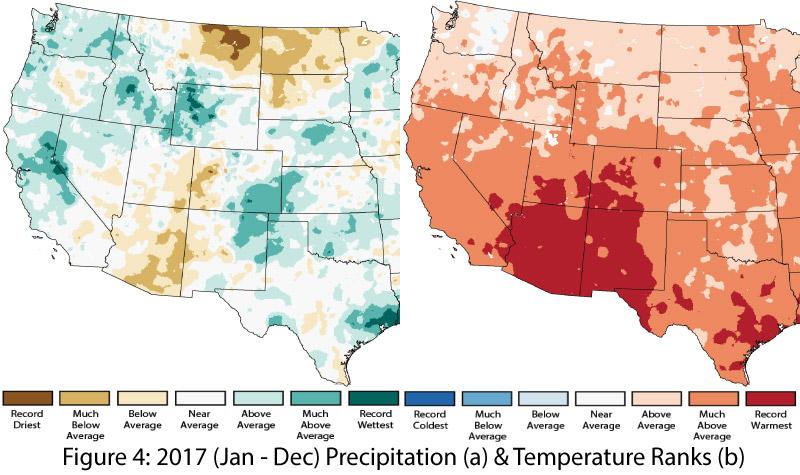 Snowpack & Water Supply: Snowpack and snow water equivalent (SWE) are below average across the Southwest (Fig. 5), with most stations in Arizona and New Mexico recording SWE of less than 25 percent of normal. The above-average temperatures and dry conditions that drove this pattern are attributable, at least in part, to the ongoing La Niña event. If warm and dry conditions persist through winter—not uncommon in a La Niña event—this will have implications for drought and water resource management throughout 2018 (see Arizona and New Mexico reservoir volumes). 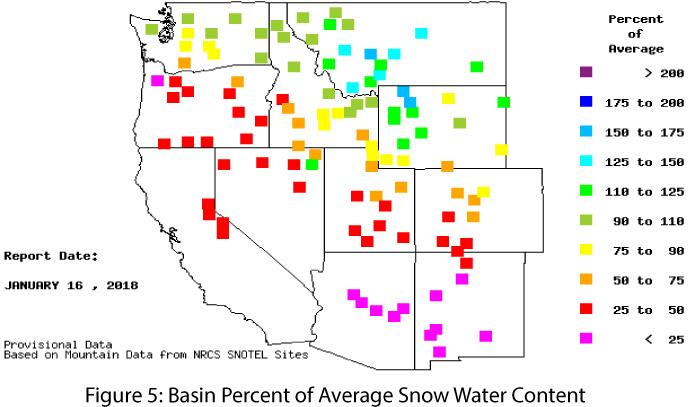 Drought: Above-average temperatures and below-normal precipitation are reflected in the expanding areas of drought designation in the Jan. 17 U.S. Drought Monitor (Fig. 6), with Arizona and New Mexico documenting increases in extent and intensity of drought since the December outlook. Most of both states was classified as moderate drought (D1), but severe drought (D2) was noted over a large area along the Arizona/New-Mexico border and in a smaller region of eastern New Mexico. Below-average precipitation in the Southwest over the last few months is a primary driver for these designations, but the drought monitor authors also considered the effect of long-term drought in their designations. 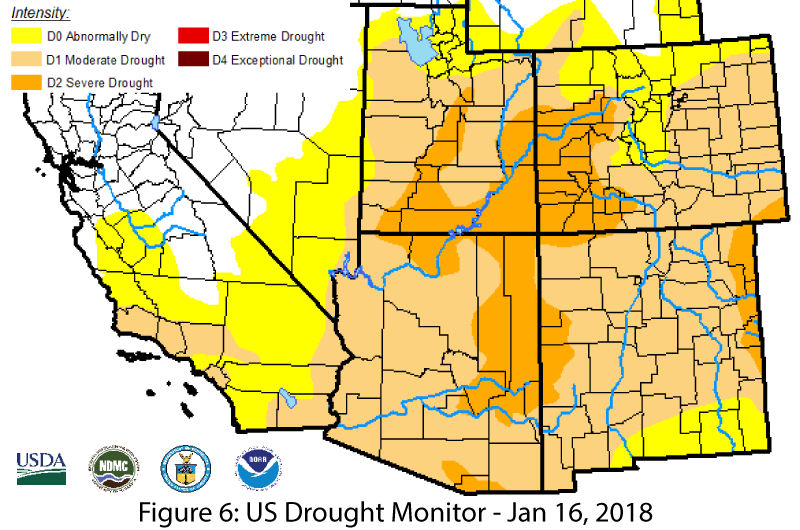 ENSO & La Niña: La Niña conditions continued for another month, although the event may have reached its peak intensity. Current forecasts suggest this weak-to-moderate event will last through winter 2018 before weakening this spring. In the Southwest, weak La Niña events tend to produce drier-than-average winters, but moderate events have resulted in more consistently dry conditions over the winter (see La Niña Tracker and DJF La Niña Precip in the SW for details). Given the drier-than-average conditions in the Southwest last fall and so far this winter, the presence of a La Niña influence continues to cause concern in the Southwest in terms of winter precipitation, drought, and water resource management. 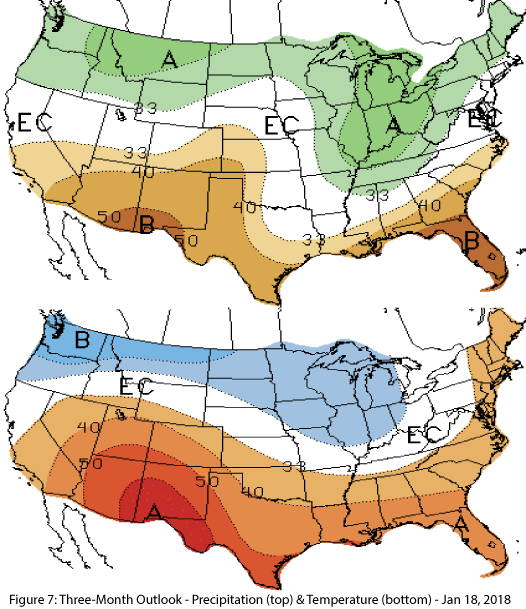