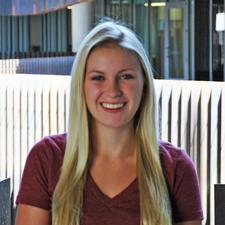 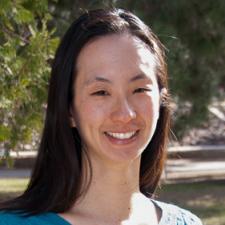 Huang is currently a M.S. student in the School of Natural Resources and the Environment (SNRE) at the University of Arizona, as well as a researcher at the Water Resources Research Center (WRRC).  Previously, she earned a J.D. from the University of Florida Levin College of Law and a bachelor’s degree in biology from Rice University.

Before coming to UA, Huang worked as a policy analyst for the Center for Progressive Reform in Washington, D.C.  She provided legal analysis regarding the Clean Water Act and restoration of the Chesapeake Bay, and she developed legal frameworks for climate change adaptation and protecting ecosystem services.

“I have always really liked the idea of combining science and decision making,” said Huang.  “I started grad school having worked in the decision and policy making field for a couple of years and in that experience I felt that there was a real lack of understanding of science.”

Huang said when she learned about the CLIMAS fellowship, she realized it captured her dual interests in both science and policy perfectly. The curriculum and her final project were ideas she had been contemplating for a long time.

“I found it the perfect fit,” said Huang.

Huang said she realizes there was a lot of interest in doing science literacy education in the legal field, but there weren’t many examples of exactly what she was trying to do.  For example, there are classes on climate change law, where students spend a few short lectures going over climate processes, but the focus is on the legal aspect of things, which makes sense in a law school.

Huang’s curriculum is different in that it orients students into thinking a certain way and towards being able to ask informed questions.

“I am not expecting them to be scientists but at least they are able to think critically about data that they are presented,” said Huang.

When Huang began, she had an ambitious curriculum. “I wanted to talk about air quality and water quality and climate process and how science works,” said Huang. “I had all of these topics that I wanted to cover in 8 weeks but when I presented it to one of the law professors who was helping me, she told me I really needed to scale back my ambitions.”

The professor told her it was enough to just try to teach people about graphs.

“Trying to understand what I wanted to teach and what could realistically be taught in the constraints of the semester that was given to me was hard,” said Huang.  “I feel like there is so much information that could be useful for law students to know, but then being realistic about what was the most important was probably the most challenging for me.”

Difficulties aside, Huang created a curriculum that not only can be applied to law schools around the country but will definitely be in use in at the James A. College of Law.  Huang will be teaching Integrating Science and the Law in Practice (LAW698O), beginning March 3, 2015.

Huang entered grad school with the idea that she wanted to have one foot each in the science and policy worlds. She wanted to figure out how to bridge communication gaps so that policies, however they turned out, are better informed by scientific research.

Huang said she wouldn’t have come up with this curriculum or put the work into it without this fellowship.

“I think UA is really fortunate to have an organization that is interested in funding this kind of policy, science type of work,” said Huang, referring to CLIMAS.  “Very often in academia, we get into our one discipline and we go, go, and go without looking across the horizon to see what is out there.”