The University of Arizona

The Pacific hurricane season was very active this year, with 23 named storms, including ten major (category 4 or above) hurricanes. This year was also the most intense Pacific hurricane season on record, with an Accumulated Cyclonic Energy of 317, breaking the record of 295 set in 1992. In the eastern North Pacific region alone, there were 22 named storms and eight major hurricanes, breaking the previous record of seven. 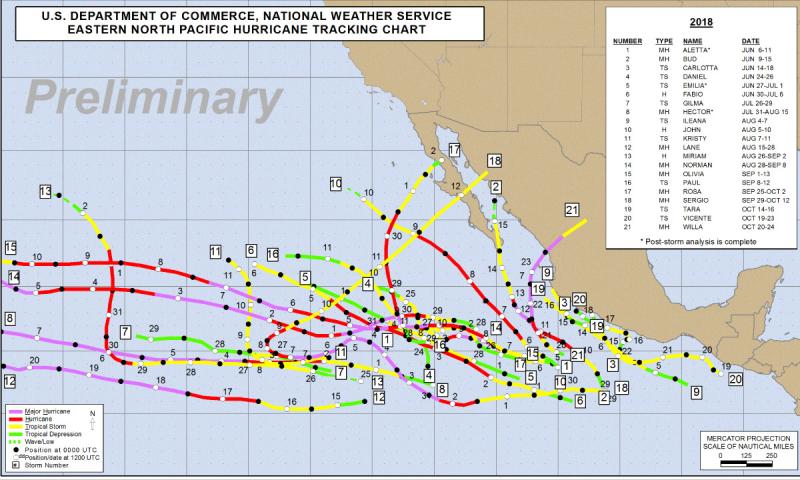 Many of the early-season storms were active over the Pacific Ocean, while storms later in the season had a few notable impacts on land, including our region. This type of seasonal progression is not unexpected: later-season tropical storms are more likely to recurve back into the U.S. Southwest either as a direct storm impact or as a source of moisture for other storm activity. In addition, we associate enhanced eastern Pacific tropical storm activity with El Niño events. In the case of the not-quite-started El Niño of 2018-2019, the oceanic conditions that are the source of the increased likelihood of this event (i.e. elevated sea-surface temperatures) can also help boost tropical storm activity that can impact the Southwest, and is a major reason behind this climatological linkage.

In mid-June, Tropical Storm Bud caused widespread precipitation across the Southwest just as the monsoon began, kickstarting cumulative monsoon precipitation totals even as some argued it should not be included as part of the monsoon* (Fig. 1). In September, after flooding Sinoloa and Sonora, Mexico, Tropical Depression Nineteen-E brought widespread precipitation to the Southwest (Fig. 2) and was a major contributor to that month’s above-normal precipitation (see Oct. 2018 CLIMAS Southwest Climate Outlook). October saw two events having notably different characteristics. Tropical Storm Rosa led to numerous school closures and state of emergency declarations in Mexico in anticipation of the storm, and numerous road and school closures in Baja California and Sonora during and after the storm as a result of flooding. Rosa also brought intense precipitation and severe flooding to the borderlands region of Arizona and up to Phoenix (Fig. 3). One week later, despite its relatively low strength, Tropical Storm Sergio caused widespread school closures and flooding in Baja California and Sonora, Mexico, before bringing more widespread but less-intense precipitation to southern Arizona and parts of New Mexico (Fig. 4). Later in October and early November, storms Vicente, Willa, and Xavier brought additional rainfall, flooding and wind to coastal Mexico and helped fuel even more precipitation in the U.S. Southwest (Figs. 5-6). There is currently no activity in the eastern North Pacific, and the hurricane season officially ends on Nov. 30, but given the widespread activity in October and November (thus far), the region remains vigilant to the possibility of one last late-season tropical storm.